Wednesday, 11/1/17, was a long day. My 2 year survival party came to a halt on the 21st floor of the Northwestern Medical Center. My MRI showed the prior resection cavity remained stable, but a new mass anterior to this in my left frontal lobe continued to grow. It was growing slowly enough that it fell within the parameters of scar / inflammation / necrosis on the last few MRIs. Not anymore.

My nurse practitioner, Meg Schwartz, called me about this ‘ditzel’ on June 30, but we were not really sure what to make of it. It grew minimally through July and August. For the last 9 weeks, it progressed to an extent that it could not be written off as inflammation anymore.

Let me introduce a new character to the blog, and the star for Team Craig on 11/13/17: Matthew Tate, MD, PhD. He is a neurosurgeon at Northwestern. Shawn Hervey-Jumper, the neurosurgeon that performed my first resection, left the midwest for University of California at San Francisco. As much as I love Dr. Jumper, UCSF is just not practical for surgery. Dr. Jumper recommended Dr. Tate. Since I had been going to Northwestern every 3 weeks for 2 years, I developed a certain comfort at that institution. We knew where to park, the best food spots, and the Starbucks locations (everywhere, but on the first floor).

The growth is small, and according to Dr. Tate, not in a very ‘important area.’ He also mentioned my prior surgery was in a ‘very delicate area’ and more challenging. A biopsy was considered, but he felt like it just made more sense to do a maximal resection since a few biopsies would basically take half the mass. Fair enough. This surgery will not be an awake craniotomy since it is not close to motor cortex (not close to anything that could be really tested while awake).

We arrived home and mentally, physically, and emotionally exhausted. Staci told me I had to ‘get it together’ for the kids. I mean, football players usually have 24 hours to get over a loss or celebrate a win, but I only get six? The kids have seen us come home so many times with good news, it was becoming routine.

Connor: (without glancing up from YouTube videos) “Did you pass your test?”

That got his attention.

If only MRIs were something you could prepare for, and either pass or fail. I would take Honors MRI. I walked out of the room to ‘get it together,’ and then came back to tell him we may have a chance to go to an MSU basketball practice, but this did not distract him.

Me: “Well, it has grown. I need a repeat resection. But the surgeon said it was pretty easy technically to remove, and not in an important area.”

Thank you. Tell that to Dr. Tate!

After we told Queen Elizabeth, she nodded, and asked, “what do you answer if you are not sure between yes or no?”

I did not know, but it sounded helpful.

And then I went out on the trampoline with the kids. I find it easier to talk to kids in a less formal setting with a distracting activity. You can talk about things in bits and pieces. So we all jumped, careful not to bounce Mia too high (she sticks to the corner and does these little ‘butt bounces’) while trying to send Ella and Connor flying. 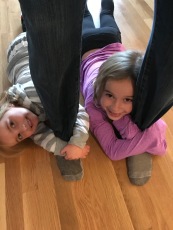 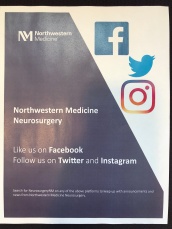 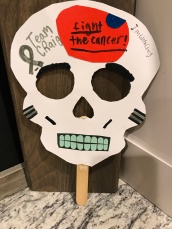 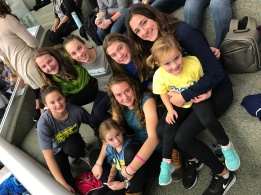 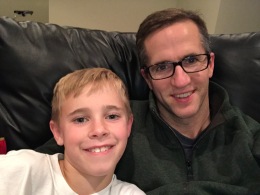 Figure: Upper left, lazy girls being dragged around the house.  Upper middle, you can now follow Northwestern Neurosurgery on all social medial platforms.  So reassuring that they are on Instagram and Twitter, not just Facebook.   They must be the real deal. Upper right, Connor made a special “Day of the Dead” mask in Spanish.  I don’t know what to say.  Lower left, fans of the EGR High School girls swim team (Allison was walking the finalists out).  Lower right, Connor and I watching MSU surprisingly beat PSU.  I certainly have reservations about football, but it makes for great television.

I went to my own clinic the next two days, avoiding thinking about it too much. I had my scheduler remove my new patients for that day. I didn’t think I could focus on a new problem. At lunch, I had a chance to sneak out to D+W on Knapp for a quick bite with my section chief and colleague Jeff Decker. We bumped into my running hero Dathan Ritzenhein in the line at Starbucks. Among other running accomplishments, he won the 2017 River Bank Run.

Me: “Hey. Wow. This is my partner, Jeff. Jeff, Dathan still holds the high school cross country state record, and is the best runner ever from the state of Michigan.”

Misunderstanding ‘partner’ in 2017, Dathan asked, “Where do you guys live?”

“Oh, no. Um. I live in East Grand Rapids and Jeff lives in Ada.”

After work, I finally headed up to Nurse Jane’s desk on the third floor just for a hug and a cry since I was keeping my cool all day. Big sister Jane.  She said I needed to remain positive, but that was tough on that day.  I was still in my mourning period.  I returned a week later to prove I was okay.

After a few days of feeling sorry for myself and shell shocked, I started to accept my new reality. I became that crazy runner at MVP Sportsplex going all out on a treadmill, up to 12.5 mph for a minute or so (which was exactly Dathan Ritzenhein’s pace for full 25K in 2017!). Those treadmill sprinters must have problems, but it feels great. I swam the next morning, cutting time off the suggested intervals at EGRA Masters. I did not have time to wait around for intervals suggested by Coach Josh.

My last day of work prior to surgery was 11/8/17 in the testing center at Spectrum Meijer Heart Center. Nurse Cindy organized a potluck (no occasion is too small for a potluck in the hospital). This time, it was all vegetarian in honor of my last day. I received well wishes and good byes from many people. Finally, it was just me and Mike McNamara in the reading room finishing up at 6:30 PM. I wanted to get a selfie with him in the reading room, but when we were getting together, I just lost it. I hugged him for a while, balling my eyes out for no particular reason except everything, and he kissed my cheek in the most masculine, heterosexual, guy to guy way possible. I got that selfie after getting control of my emotions and walked out of Spectrum Hospital with him, hopefully not the last time as a cardiologist. 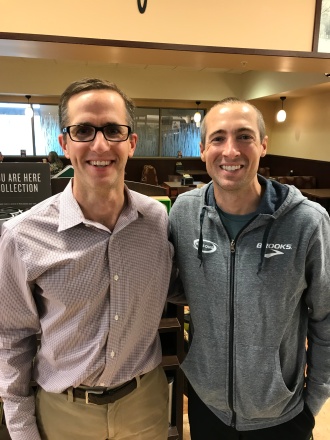 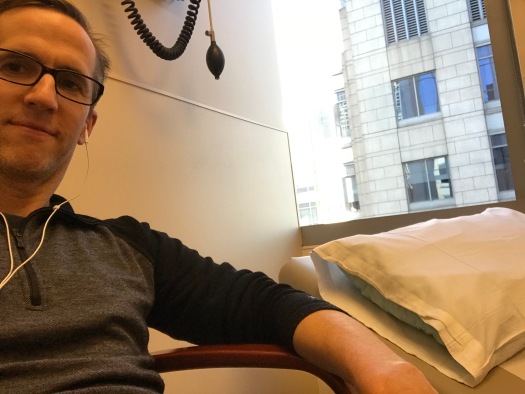 Upper left, Two runners just hanging out, talking about the River Bank race. I actually told Dathan my best time in the 25k for some reason.  Upper right, the start of my last day with Nurse Cindy and ‘partner’ Jeff Decker.  Middle right, wrapping up my last day with Mike McNamara after I gathered myself.   Lower right, my personal stress test.  Bottom, waiting for the anesthesiologist decide whether I am healthy enough to have my only problem removed.

I knew this story had a few more chapters. The last several blogs were all character development like those middle episodes in a Netflix series. Just filler. This protagonist apparently needs to another mountain to climb.

It feels like a cycle. It is cold and cloudy here in Michigan in early November, just like 2 years ago. Trout Steak Revival just released a new album (don’t wait for Rick McNamara to give it to you cheapskate doctors, go buy it!). I am in better shape than 2 years ago when I had my first surgery, training regularly and eating as healthy as possible. Staci practically has me on a whole food plant based diet with the exception of pizza weekly and local beer nightly. I hope it helps. I would celebrate another two years of this.