Hello again! I’m sorry I haven’t written to you in a while. Honestly, I have just been really busy. You know how it is during these summer months with the kids home. It’s not you, it’s not me, it’s them.  And writing a blog is incompatible with living in denial for the summer, but here we go…

I am working part time. Officially, it’s 50%. Now that my hair has (mostly) grown back, denial is easier with strangers. With new patients, I’m usually just Dr. Alguire, the cardiologist, not Dr. Alguire, the cardiologist with brain cancer. That is, if they do not google me first or stumble onto this blog. I doubt I am a better doctor, but I do have an eerie awareness of how quickly health can change.  It has helped my performance ratings, however. Anything to get a ‘yes’ response to our survey question “Likely to Recommend this Provider.” I do not advise brain cancer as a desperate approach to win approval, however.

I’m seeing my patients that were rescheduled back in November, December, and January with another provider. Understandably, they had to look around. Our relationship was certainly in question, and we had to open it up. Explore other options, if you will. I’m just glad that at my office we decided to disclose that I was on medical leave. Patients are always very curious when they hear their doctor is ‘on leave.’ It is sometimes a dual appointment, me catching up on the patient history, and then giving some of my own. Each day, somebody will see me for the first time since my diagnosis. I’m old news around the office, but for some of many old patients, the diagnosis is still new.

“Are you cured?” Depending on how I feel, I can chose my answer:

“Everything is going very well” which is true.

But I can never bring myself to say “Yes,” even though I would like to play that role sometimes. “Complete remission, thank you very much!”

I just saw an 80 year old woman who had a heart attack and coronary artery bypass grafting (CABG) at Blodgett Hospital 35 years ago. Her husband died 25 years ago, but dating was not for her, didn’t want to be tied down. She still works at a countertop store and is going to Hawaii this fall to celebrate her 80th with a girlfriend. I told her there is no way I would’ve guessed she would be alive and thriving at 80 after having a CABG in 1980. Needless to say, I am not her first cardiologist. Or her second.

“I’ve retired all my doctors,” she proudly said, then let me know I wasn’t going to be an exception.

As a distraction, we packed in a lot of sports in the summer’s first half: the Grand Rapids Triathlon (participant), the swimming Olympic Trials (fan), Rascal soccer try-outs (dad), Real Madrid vs Chelsea, and swim meets (dad again). We met several athletes in the last few months including Denzel Valentine, Dana Vollmer, Tyler Clary, Mel Stewart, and Michael Phelps’ mom and son (we missed an important generation in there). But wait, what about culture, you ask? I read most of the New Yorker’s cartoons this year. Also, read the title of every New England Journal of Medicine and JACC article to keep me up to date in medicine. Heck, I was even on the cover of a major medical journal not once, but twice! 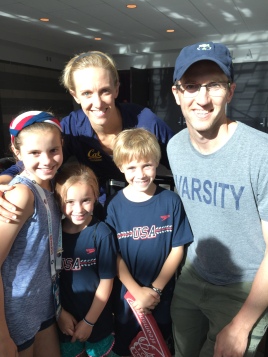 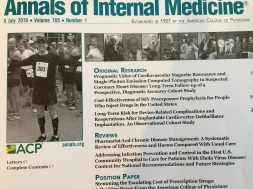 When you say you are going to Nebraska for a summer vacation, an explanation is often needed. Where else would you want to vacation in June? The 90 degree weather, easy access to highways, fresh corn. The Olympic Trials have been hosted in Omaha for the last 3 Olympic cycles. We packed up our 8 year old Honda Odyssey and headed west June 25th in a caravan with the my sisters’ families and parents. After about 7 hours of driving, we met again outside of Des Moines in the quaint town of Urbandale. We woke up once at 11 PM to find the air conditioner’s programming was off, and instead of cool air, we were getting heat. After the front desk staff tried a few mini-repairs, we just opened our door, cooled it out, and turned everything off. Iowa in summer with no AC or fan: priceless. Someday it will be a good story, I thought. Not quite yet.

The Olympic Trials were simply the most entertaining sporting event I’ve ever seen live. On the first day, Ryan Lochte swam the 400 IM. He was the first seed going into finals, but looked terrible in finals, ending up 3rd. Turns out, he had a groin injury. This is the same event Michael Phelps has stopped swimming because it is so grueling. This is the same event that my niece Kathryn has the 13-14 state record and placed 3rd in sectionals behind two collegiate Ohio State swimmers, breaking her own state record again in the process. The winner, Lindsey Clary, actually made the final at the Olympic Trials. Scary fast that kid.

The kids were just as excited to get autographs and pictures as watch the swimming. In this house, Steph Curry, Messi, and Missy Franklin are all considered equals in stardom. Ryan Lochte is my favorite elite swimmer. Not because he is the best, or is the most insightful (please don’t see “What Would Ryan Lochte Do,” just a disaster of a reality series), or his many selfies in a Speedo on Instagram. He has the misfortune of being in the same generation of the greatest swimmer ever. Michael Phelps has put a lot of swimmers into retirement, but Lochte just kept racing him. Only Ryan Locate could step on Michael Phelps’ heal walking out onto the Finals of the 200 IM at the Olympic Trials and get a smile. He is just pesky and persistent.

With Mia starting Goldfish swim school, all my kids swam this summer. Allison did the IMX challenge at Jenison which is a series of strenuous events. Most kids just try to keep it legal, finish each event, and get a trophy at the end for completion. After day 1, we found out via MeetMobile (a swim app) that Allison was DQ’d on her breaststroke turn on a nebulous rule. I had to tell her, and she was very disappointed (read: crying). The next day, she DQ’d another event due to a similar ‘problem’ (my unbiased opinion is that the rule was interpreted incorrectly). After the second event she DQ’d, her coach gave her the best advice I’ve heard this summer.

Exactly. Whatever. A little perspective is needed sometimes. And Allison did not want to make a big deal of it.

It reminds me of coaching my niece Mary Violet got after a poor soccer performance by her whole team.   “Just flush that one down the toilet.”

Sometimes there is just not much to say. No further analysis. No more thinking about it. Just get over it.

The night before the meet, Allison consoled me, “I am so used to not getting state cuts, I think I will be fine if I don’t get any.” But after a few days of taper, and putting on a suit that looked like it would fit an American Girl Doll, she got a few.

The summer swim season concluded successfully with a few state cuts for Allison, and Connor even participating in two 9 – 10 yo relays.  Each made the podium in the relays.  And even more impressively, the EGRA Waves took 3rd overall in the meet.

Staci’s brother and family came up from Texas bringing their four, and my kids’ only male cousins. They had a great time kayaking, hunting for turtles (catch and release), hitting all the Grand Haven favorites, and just constantly running around. I never knew who would be sleeping at our house, and sometimes it was just Staci and me after multiple sleepovers were arranged.  That is a vacation!

Nap update: In the summer, my naps have not been quite the same. I’m doing more of a coffee-nap. The summer has certainly thrown out the old routine of quiet afternoons with 4 kids in the house. And Mia’s napping days are numbered since she now stays up until well past 10 PM after naps.

So I continue to go to Chicago every 3 weeks for Pembro and take my chemo at home for 5 consecutive days on 4 and 5 week intervals. And I don’t wrestle with the big picture much, just what’s next.  Pembro works better in some cancers (lung) if they are PD-L1 positive.  I have no idea what my status is, and I plan to keep it that way for now.  Wouldn’t matter with my trial, nothing I can do about it.  I mentioned denial at the top. It is not denial, it’s just selective consideration.  We are now considering where to vacation next.

Figure: Left two, my ride to Chicago 7/26/16.  Had to prove to my section chief Jeff Decker I was actually getting treatment in Chicago.  Middle right, Connor and me at a soccer game in the Big House.  Right: Kyle Williams, Dad, Connor and me ready for the game.  We got the full European soccer experience with a few hooligans behind us, spilling beer and profanities all over us.

4 thoughts on “What Cancer?”